Banshee 1.5.4 is out, with cool new features and lots of fixes! This is our fifth release in preparation for our big 1.6 release at the end of March.

We have made a 1.5.4 release of Banshee Community Extensions as well. This includes the Alarm Clock, Lyrics, and Mirage extensions, and several others.

The Mirage extension has been modified heavily, dropping the old “Automatic Playlist Generator” in favor in integration into the playback controller – adding shuffle-by-similar, and into the Play Queue Auto DJ – adding fill-by-similar. Mirage calculates the acoustical similarity between two songs.

Under Preferences, you can choose to "Improve Banshee by sending anonymous usage data" back to the Banshee developers. This collects information on what version you're running, what OS, library size, slow SQL queries, and a whitelisted subset of your preferences. This information will help us choose better defaults and see what parts of Banshee are used most and can be improved.

The 30+ people running a development version of Banshee and already submitting data are using 11 different language locales, have a median screen resolution of 1440x1024, and a median music library size of 5k songs. I'm working on some analysis/viz software to crunch the data - stay tuned! Other Notable ImprovementsMore Information

As always, check the release notes for more detailed information, screenshots, and download links. Thanks to everybody who made this release happen!

Writing a Banshee extension and getting it into users' hands has never been easier. We have started a new sub-project called Banshee Community Extensions (BCE), collecting various existing extensions under one source repo, bug tracker, and autobuild setup.

Its source is hosted on gitorious, dramatically lowering the barrier to committing and sharing your code publicly.

This centralization makes things easier on translators and packagers, too. And users get access (without manually downloading/installing) to the fruits of the extension community's labor.

Creating a Working Extension in Minutes

It's ridiculously easy to make a new extension. Install Banshee 1.5.3 (including the devel package), or build/install the latest from git master instead. Then,

This creates, builds, and runs Banshee with your extension. Go to Edit » Preferences » Extensions to enable it, and see it appear: 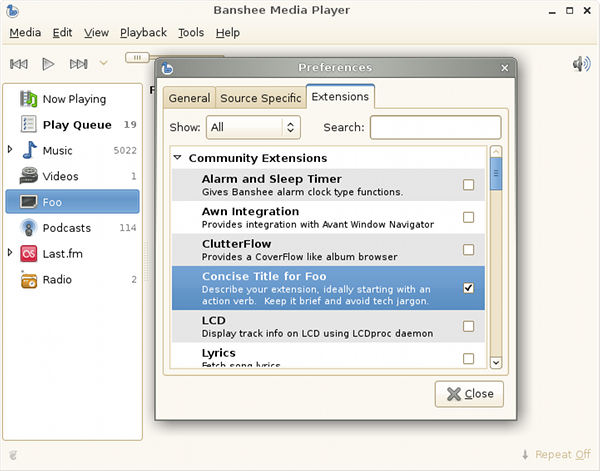 We already have seven extensions migrated, and one brand new one!

And, we have 13 maintainers already!

We have bleeding-edge openSUSE/SLED packages available, and Ubuntu packages should be ready in time for Banshee 1.5.4 next week.

If you've been putting off some extension idea you've had, delay no longer! Read the full Extension Writers Guide, and get started today!

Thanks to Chow Loong Jin (aka hyperair, our fearless Ubuntu packager) for broaching the idea behind BCE, and to Bertrand Lorentz for teaming with me to get things to this state - in just two weeks!