As scheduled, we just released Banshee 1.6.0! This release has been a long time coming, and we're really proud of it. 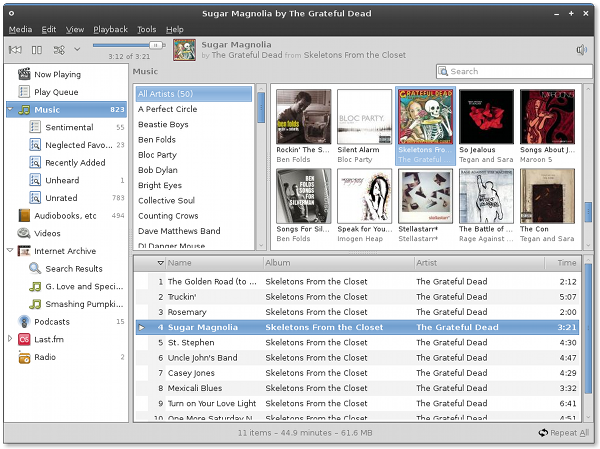 We originally intended to release 1.6 last fall, but we got caught short on time, and ended up calling 1.5.1 a stable release so distros would feel comfortable picking it up, but of course the weird versioning has caused quite some confusion.

We continued the 1.5 series with 1.5.2 though 1.5.7 betas, leading up to this release: 1.6.0. The process really started 14 months ago when we branched off 1.4, and master became the workplace for 1.5. It wasn't even until after we branched that Alexander Kojevnikov, now one our most prolific contributors and a maintainer of the project, got involved!

53 programmers contributed to Banshee 1.6 just since 1.5.1, and over Banshee's full history, 142 programmers have contributed. I think these are astounding numbers. And these don't include Banshee Community Extensions, which started two months ago today and already includes 15 extensions and 19 maintainers.

We fixed 265 bugs since 1.5.1 as well (over 500 since 1.4), added dozens of new features and enhancements, and had over 2,000 beta users opt-in to report anonymous usage data that we will use to make Banshee better.

Here are some of the new features in Banshee 1.6. Read the Release Notes for more detail, screenshots, and enhancements not listed here.

Thanks to everybody who has helped make Banshee such a success! Tremendous thanks go to Bertrand Lortentz and Alexander Kojevnikov, who over the last year in particular have contributed countless hours writing their own patches and reviewing others', triaging bugzilla, being active on IRC and the list, and generally being great maintainers of the project. They have invested in Banshee, and the effect on Banshee's quality and the community's growth is evident.

You can tap into the Banshee community and energy in many ways – read Planet Banshee, follow us on Twitter, lurk in the #banshee chat room, subscribe to banshee-list, monitor bug activity, and keep up with the latest code. We're a friendly, productive bunch, so stop by if you have a question or idea, if you want to contribute or you just want to learn how you can make your own project better.

Banshee now uses the playbin2 GStreamer element. With this comes support for gapless playback, which is the default now for users with GStreamer > 0.10.25.2.

We are debuting a new grid mode for our custom list widget, visible in the modified Album browser. It will be used for Videos, Audiobooks, and more in future releases.

Album browser, now as a grid

This extension shows YouTube videos in the Context Pane related to what you're playing, and lets you watch them within Banshee. You can enable it in the Extensions tab of the Preferences dialog.

The Mirage shuffle/fill by-similar mode has been greatly improved. It's smarter, now looking for tracks similar to the last several you've played, and dissimilar from ones you've skipped.

We are now string frozen in preparation for our 1.6 release on March 31st - so translators, full steam ahead! We might do a RC 2 in a couple weeks for additional testing and fixes. File bugs for any issues you find, and help us make Banshee 1.6 the best release ever!

Last Wednesday we released Banshee 1.5.4, which included an opt-in feature to submit anonymous usage data. Over 500 people have already opted-in!

Interesting Stats
They are primarily getting Banshee through the Ubuntu PPA, with a moderate number building from source or using other distributions — including 20 OS X users.
They are using Banshee in 36 locales, across 30 languages. Keep in mind the Preference to opt-in is (so far) only translated into 9 languages. About half have the Banshee window maximized, enable ReplayGain support, show the bottom-left cover art, and show the context pane.

I'm still working on better ways to analyze the data and extract actionable information. I plan to have distribution graphs and such soon. In the meantime, I've posted some more stats here. As we get more submissions, add more data points, and get better analysis, we will be able to identify options nobody uses and optimize Banshee for real-world users.
15 comments:
Newer Posts Older Posts Home
Subscribe to: Posts (Atom)